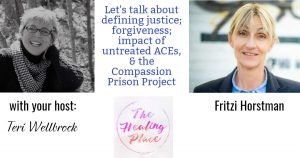 I feel honored to have had the opportunity to sit with Fritzi Horstman, founder and Executive Director of the Compassion Prison Project, to discuss her brilliant and beautiful insights on:

Welcome to The Healing Place Podcast! I am your host, Teri Wellbrock. You can listen in on Pandora, iTunes, Blubrry, Spotify, Deezer, Google Podcasts, Amazon Music, Podbean, and more, or directly on my website at www.teriwellbrock.com/podcasts/. You can also watch our insightful interview on YouTube.

“Fritzi Horstman is the Founder and Executive Director of the Compassion Prison Project an organization dedicated to bringing compassion, childhood trauma awareness and creative inspiration to all men and women living behind bars.

She directed “Step Inside the Circle,” after working with 30 incarcerated men living at Kern Valley State Prison for over a year and learning about the extent of their childhood trauma.

She produced HBO’s “The Defiant Ones” directed by Allen Hughes which premiered July 9, 2017 and has garnered several awards including IDA Best Limited Series, NAACP Outstanding Director in a Television Movie or Special, Grammy for Best Music Film and was nominated for five Emmy Awards including Best Documentary.

Her first feature, “Take A Number,” which she wrote, produced, and directed, debuted at the Slamdance festival in 1997.

She directed several shorts and documentary shorts, one of which, “Downtown,” won an award at the USA Film Festival.

She directed a documentary on James Joyce entitled “Joyce to the World,” featuring Brian Dennehy, Frank McCourt and Finnoula Flanagan.

Fritzi is passionate about equality, civil rights, education and stories about justice. It is her life’s work to makes sure these stories get told.

Fritzi studied at New York University’s summer film program and received a Bachelor of Arts in Film and English from Vassar College.”

Learn more about Fritzi and her mission at https://compassionprisonproject.org/ 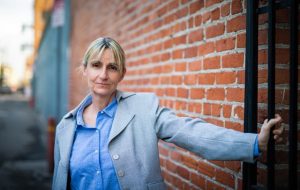 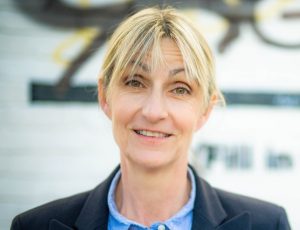 Peace to you all!